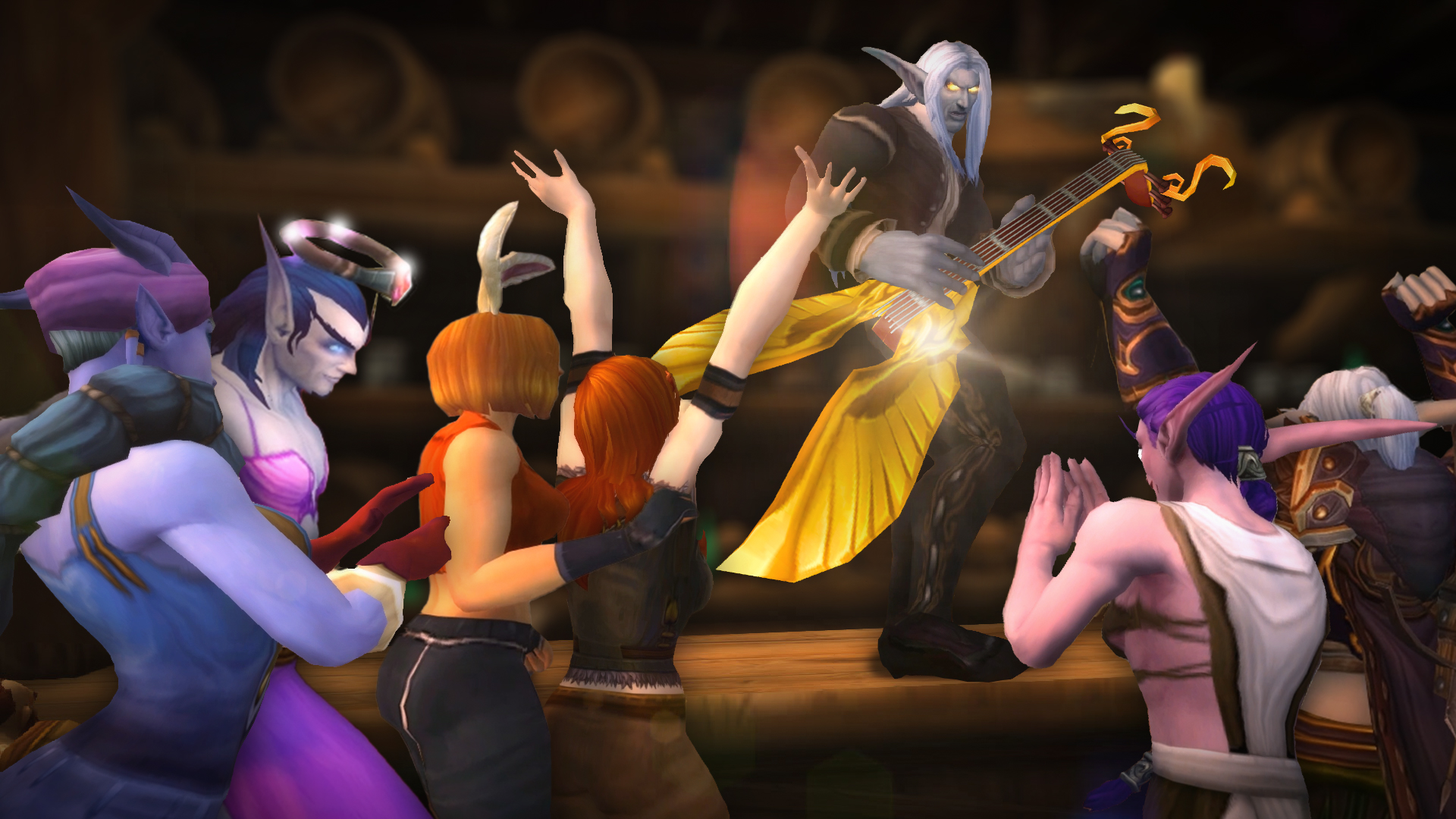 For the first time in World of Warcraft, your character can literally become a bard!

Play music for you and the other players, from MIDI files or live, using 22 instruments and 2 percussion sets from various styles: medieval, celtic, folk, tribal and heavy metal. 🤘

Left-click on the minimap button to open the main menu.

Type /mus help in the chat window to get the command list.

How to listen to music

All you need is to have the add-on installed. Nothing more is required.

How to play music

Musician plays music files in MIDI format. MIDI files have a .mid, .midi or .kar extension and do not contain any sound like MP3s, but a sequence of notes. This is why a MIDI file sounds differently according to the software or musical instrument it's played on.

You can find millions of MIDI files very easily by searching for MIDI + music genre/title/etc. on Google. I also made a selection of cool music files you can try with the add-on.

How to play a song 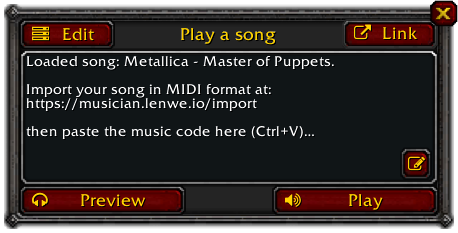 Save and load songs in game

Songs can be saved and loaded back in game using the optional add-on MusicianList.

Play as a band

Songs can be played in sync as a band, in which each member is playing a different part.

To allow synchronized play, all band members should be grouped in the same party or raid and have the same song loaded into Musician.

Live Mode literally turns your computer keyboard into a piano.

Click Open keyboard in the main menu or type /mus live to open the live keyboard.

Before using the keyboard for the first time, you have configure it to determine its physical layout.

This process is straightforward and takes approximately 30 seconds to complete, just follow the on-screen instructions. 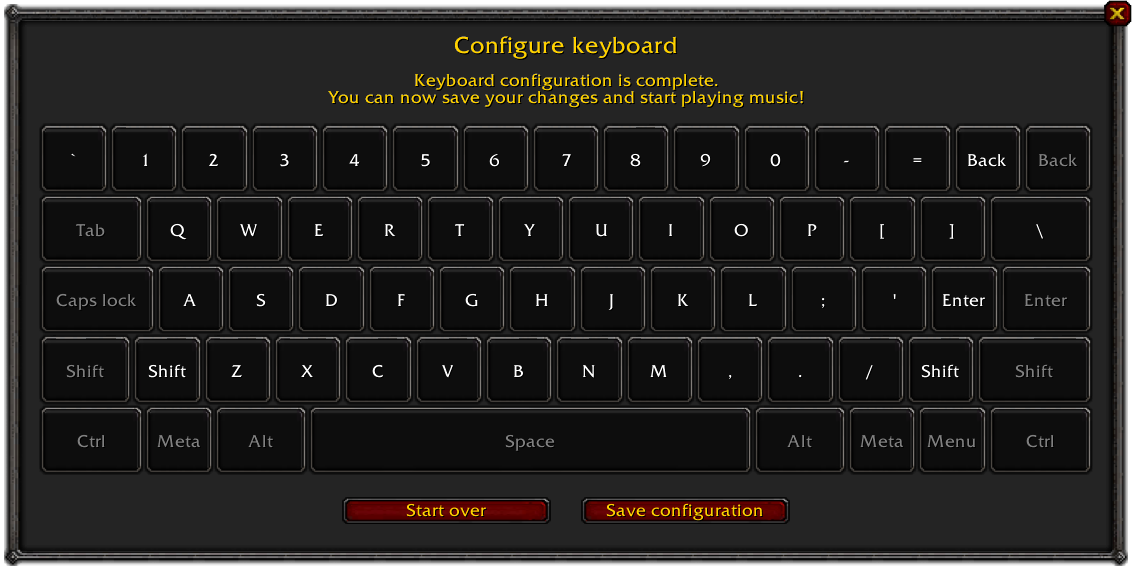 The live keyboard consists in two layers, Upper and Lower, respectively the two first and two last rows of your keyboard (or the right and left side, depending on the layout used). Each layer has its own instrument setting so 2 different instruments can be played at the same time or the same instrument can be set to both layers to take advantage of the full keyboard.

Various keyboard layouts are available, including simplified ones with limited notes but a wider range of keys.

The spacebar acts like the sustain pedal of a piano.

The keyboard settings can be saved in 12 program slots, accessible using the 12 Function keys: 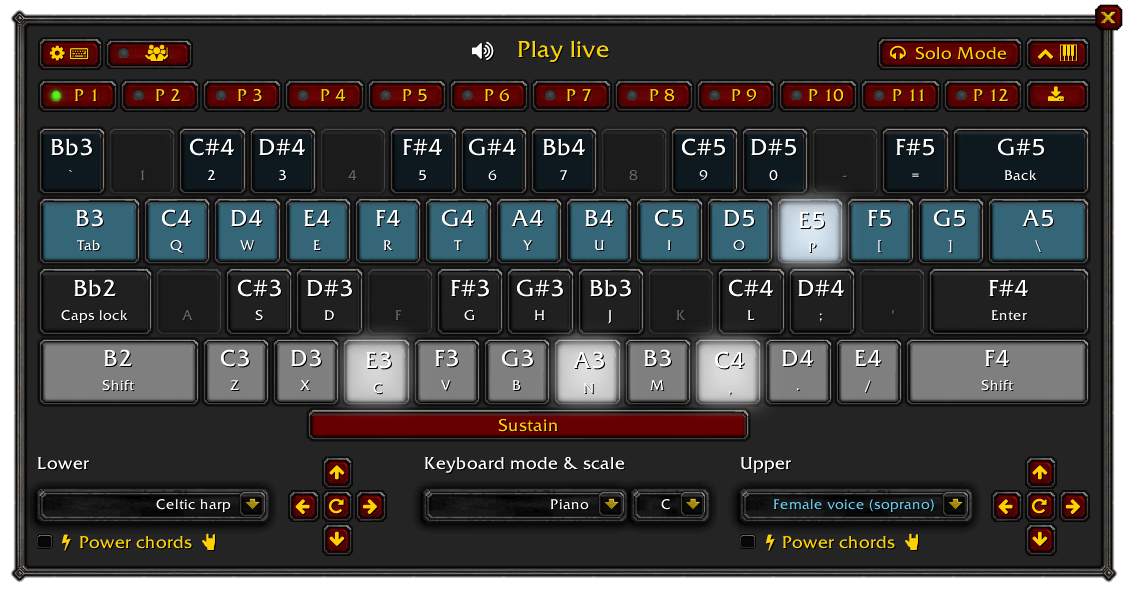 Play as a band

It's possible to play as a band in Live Mode. All the members of the band should be grouped in the same party or raid.

on the live keyboard window to turn on the synchronization. In counterpart, this may result in some latency so you won't be able to play fast paced songs in this mode.

Use the Solo Mode if you need to do some adjustments you don't want the other members of the band to hear.

Enable nameplates to see who is playing what.

Play with a MIDI keyboard

There is no support for MIDI keyboards in World of Warcraft. However, it's possible to emulate keystrokes with a MIDI keyboard using third party software. Check out the Musician MIDI add-on to learn how to achieve this.

Some basic modifications can be made to the imported song in the song editor, which is accessible from the Edit button or the main menu:

The song editor also shows some information about the tracks (MIDI instrument, start and end points, number of notes…) and the activity while the song is playing. Click the track start or end point timecode to reach it in the timeline.

as long as you have the same song loaded in the editor. 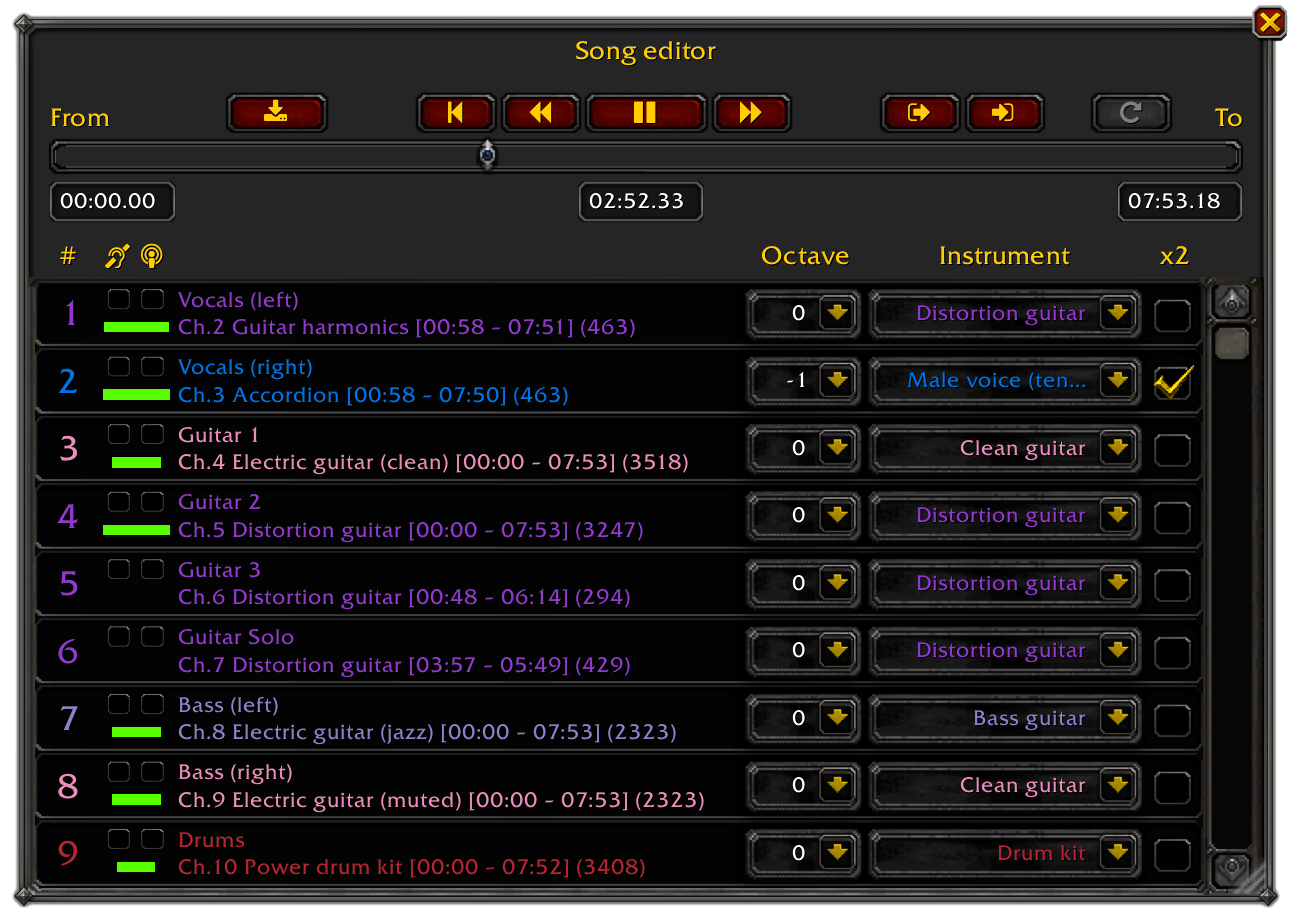 Songs can be shared with other players as links to be posted into the chat. Click the Link or Export button

, set a title and you're done!

The links remain active until you log out or reload the interface.

Cross-faction (and cross-realm) music can be achieved on WoW Retail through the Cross RP add-on by Tammya-MoonGuard.

This add-on is very straightforward, just install it and it works!

Cross RP relies on a peer to peer network established by the players who run it so the faction/realm you want to play with may not be always reachable. Feel free to encourage other players to install Cross RP and expand the network!

You can see what realms and factions you're connected to in Musician's options or by mousing over the Cross RP minimap button. 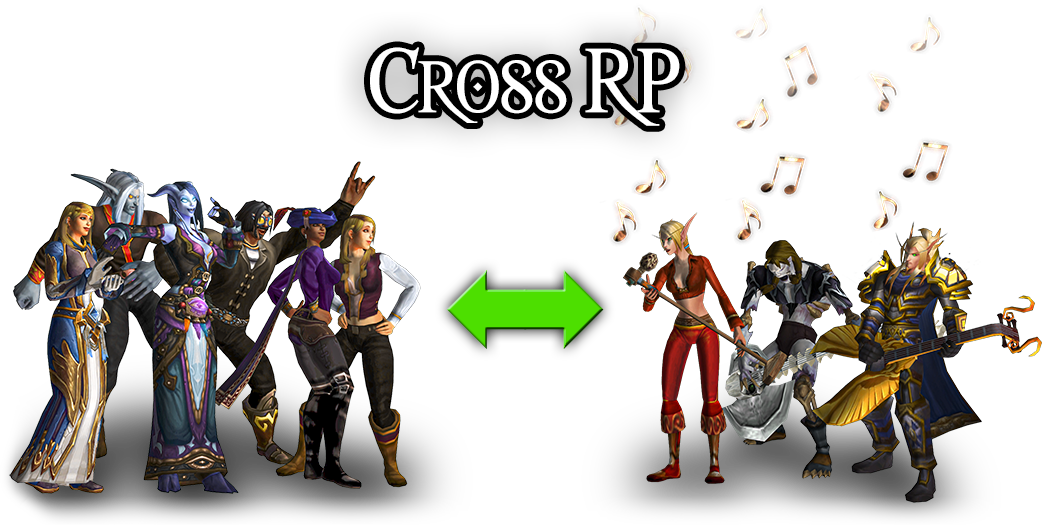 Musician integrates with role-playing add-ons Total RP and MyRolePlay to benefit from some of their features, such as roleplay character names and tooltips.

Total RP's map scan feature shows players who also have Musician with a 🎵 icon. The icon blinks for players who are currently playing music. 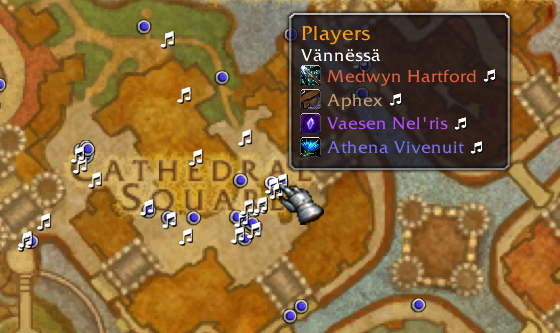 In addition, the Total RP Extended plugin allows you to export your songs as sheet music items that can be traded with other players. Click the Export button to create one. 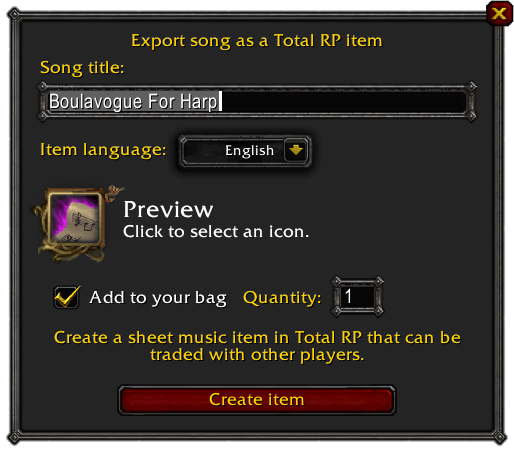 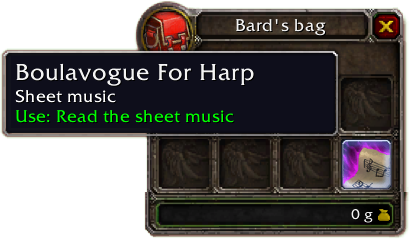 Compose your own music

You can compose music for Musician using any MIDI sequencer such as MidiEditor (free and cross-platform).

The 18 melodic instruments available are:

The other instruments are mapped to the closest-sounding instrument among the ones available (violin → fiddle, guitar → lute etc.).

The drum kits are replaced by traditional percussions such as a bodhrán (frame drum), a tambourine and a shaker. A standard drum kit is also available for heavy metal songs.

Check the full mapping in Musician.MidiMapping.lua for details.

Unfortunately, due to limitations of the WoW UI, velocity and controls (volume, padding, pitch bend, modulation…) are not supported. The polypohony may be limited for some players, try to avoid songs having more than 12 simultaneous notes.

Here is a summary of the problems you may encounter:

If you like Musician and want to support its development, you can become a patron or just make a donation.

Special thanks to the supporters of the project:

If you like this addon, consider giving them some support

Unable to detect if WowUp is installed, download it today to install with ease!